(This is a response to the group owner, Prof. McAdams of Marquette U, on the group alt.assassination.jfk., a confirmed WC defender.  This group is run, imo, much like the Mad Hatter’s Tea Party, where McAdams gets to make all the rules and feels comfortable attempting to destroy the credibility of anyone who disagrees with him. Ahem.  You can guess where that leaves me. :-0)

For some unknown reason, McAdams likes to inject the Holocaust into various threads, always appearing to try to position me as a Holocaust-denier. That in itself is odd, in that it would seem the WC defenders would me more inclined to deny the Holocaust, not the CTs.

For McAdams information, let me share another area of my research for a different project. I am currently researching the history of the Berlin Philharmonic, which was once, literally, the Reich’s Orchestra. I am posting on threads on another blog (not mine) about the Vienna Philharmonic, which to this day has only a handful of women and is currently scurrying to ‘present’ research on their connections to the Reich prior to the anniversary of the Anschluss (when Hitler annexed Austria to Germany) in March.

On Holocaust Remembrance Day, January 27 (which also happens to be Mozart’s birthday, and it is named thus because it was on this day in 1945 that Auschwitz-Birkenau was liberated) I watched a live streaming opera from Vienna about the terrible events that transpired during the Reich at a children’s hospital there called “Spiegelgrund”. Here is the link, it appears to be still available for viewing:
http://www.sonostream.tv/spiegelgrund-an-opera-by-peter-androsch/

So if McAdams wants to raise any more red flags, this is definitely the way to do it.

I have spent time at Dachau. Has McAdams?

I have been talking and tweeting about what I call “Minnegeddon” since I wrote that episode last summer.  It is the last in the project PIPER TO THE ALTERNATIVE, and describes how the forces of the Kindgom of the Night come up against Pamina and the magic flute.  At the center of the conflict is the Salzburg State Orchestra (of  Salzburg, Northland, not Austria) and its cadre of ill-intended players, led by Christopher Rand.  I thought I understood the plot line, the interactions of the characters, and the anticipated outcome.  But that may not be the case.

Let me add one note to my mini-review of the pre-Grammy concert — with the repeated callbacks and standing ovations, not to mention the tumult of sound following the S5, everyone knew there would be an encore. We might even have anticipated that it would be — Sibelius! The really astute might have realized that “Finlandia” would work perfectly — an ideal length and a lot of punch.

So when the chords of “Finlandia” were briskly sounded, my first reaction was, “Oh good! I haven’t heard this live in a while.” My second reaction was, ‘Oh no, this piece can really be murdered through overplaying! EEK”. So I slumped down a bit in my seat and waited with nervous anticipation. I need not have worried, for Maestro Vanska sped through the piece, pulling out its very heart and essence, without an insincere or trite beat. It was, in fact, the finest reading of the piece I have heard. 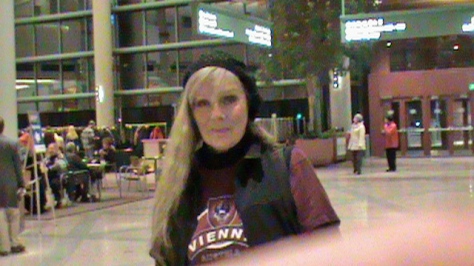 This was a wonderful yet bittersweet event. I had prepared myself to hate the acoustics, as the auditorium is better suited to speeches than concerts, but was far more disappointed than I had anticipated, as the contrast between the quality of sound of the concert and the cd was dramatic. The dramatic crescendos were sucked into the cinderblock walls, while each and every attack could be heard clearly, exaggerating any imperfection in tonguing or intonation. If one didn’t listen carefully, it might have seemed that this was a well-rehearsed university orchestra.

But then there was Maestro Vanska, dipping and twirling around the podium, jabbing at the air with such ferocity one might wonder if he was in the process of keeling over with a heart attack. I don’t know how he gets such sound from the players with the erratic direction he seems to give, but the effect was pure magic. In the midst of this odd setting, in the midst of drama and tension probably unequaled in the history of this orchestra, they played their hearts out, and the drab venue came alive and almost vibrated with glorious sound.

An breath of fresh air, speaking out about some tangential things connected to the Mo-lockout